Can’t find the product you need? Our support team is standing by to help you find the right solution or recommend replacement products. Click here for live chat.
StarTech.com

Connect a PCIe M.2 SSD (NVMe or AHCI) to your computer through PCI Express for ultra-fast data access

Get ultra-fast data access by adding a PCIe M.2 SSD to your existing computer. This adapter lets you add a high-speed, 4-lane M.2 SSD (PCIe-based), such as a Samsung 950 Pro or Samsung SM 951, to a PC with an available x4 PCI Express expansion slot. You can mount the PCIe M.2 drive directly onto the adapter, giving you an easy and convenient way to improve your system performance and expand overall internal storage.

The expansion card lets you take full advantage of the fast performance and compact size of PCIe M.2 internal solid-state drives. The adapter connects directly to your computer motherboard to support an M.2 PCIe-based SSD (NVMe or AHCI) through ultra-fast x4 PCIe. The adapter is compatible with PCIe 3.0 motherboards and is also backward compatible with PCIe 2.0 and PCIe 1.0. With the M.2 PCIe based drive in place, the adapter gives your computer a significant speed boost.

The expansion card is equipped with a full-profile bracket and includes a half-height/low-profile bracket, for installation in small form-factor computers.

The PEX4M2E1 is backed by a StarTech.com 2-year warranty and free lifetime technical support.

Enhance your system by mounting four M.2 SATA-based SSDs into one 3.5” drive bay

Turn your solid state drive into an ultra-portable pocket drive

Build a RAID array with two mSATA SSDs that can be installed into a single 2.5in SATA bay

SATA Drive to mSATA Host Adapter for 2.5in / 3.5in SATA Drives

Turn an mSATA host connection into a standard SATA port

Turn a SATA host connection into an mSATA port

Convert an mSATA mini-SSD into a Standard 2.5in SATA SSD

Are there any hard drives or motherboards that are incompatible with this hard drive adapter?

For example, the Intel 750 series SSD may not work as expected when you use it with certain motherboards. For more information, refer to the Intel documentation for the 750 series located here: www.intel.com/content/www/us/en/support/solid-state-drives/consumer-ssds/000005729.html.

Will this hard drive adapter allow me to boot an operating system from my hard drive?

You can use this hard drive adapter to boot an operating system from; however, depending on the SSD and motherboard that you are using, you may need to update the driver or BIOS in order for the hard drive to be seen when you initially boot the operating system.

If you experience issues when you use the hard drive adapter to boot an operating system, check with the manufacturers of the SSD and motherboard for updates.

You should also check to make sure that the SSD and motherboard are compatible. For more information, refer to the following FAQ: https://www.startech.com/faq/hard_drive_accessories_m2_u2_compatibility.

How can I tell which M.2 hard drives will work in this device?

This device can adapt an M.2 PCIe drive to connect to PCIe connections, which is not possible for a SATA based M.2 drive. The key type refers to the connector type on the M.2 PCIe drive, and the M key can only be M.2 PCIe. It is important to check the specifications of the drive to see if it supports PCIe M key.

* Same day shipping is only available for orders shipping within the United States.

Need a little help getting started? Check out our review guidelines.

(1 star) dell wont boot from this

Matt, Customer Support on 6/6/2019 1:09:46 PM
We’re sorry to hear our PEX4M2E1 is not working properly in your setup. This card is a pass-through adapter that allows an NVMe SSD to connect directly to the PCI Express bus of a computer which is why there are no drivers needed for the card. To boot to an SSD connected to this adapter you would need to make sure your computer can support booting to NVMe SSDs. If you require assistance we would be happy to help look into this for you. Please contact us at www.startech.com/support where our Technical Advisors are available 24 hours a day, 5 days a week to provide support.

By: Nick_185 on 12/27/2018
Install is simple, and the box included the necessary screws. Used a Samsung 850 EVO m.2. Win10 picked it up right away. This thing is plenty fast on the older ASUS motherboard I am using (son's computer). He is plenty happy at the speed difference over his old SATA drive, and even over the old SATA SSD we had in there. Though I can't say that I had time to do any detailed measurements, he was talking about it all day, telling his friends how much faster the computer was, etc. and the only change was adding this adapter with the m.2 drive mounted on it. I just ordered another one for myself and am going to tinker around with Linux and an HP Mini Server (low-profile bracket was in the adapter box too!). I received this product in exchange for an unbiased review.
Comment Helpful? Yes - 1 No - 0 Report

By: AAK70 on 10/14/2018
Windows SBS2011 and Server 2012 unable to see NVMe as a secondary drive with this controller. Provided steps are useless and complicated. Both controllers are going back. Startech should put more effort to assist customers with this product instead of suggesting to follow 20 steps to get it working.
Comment Helpful? Yes - 2 No - 10 Report

Sam, Customer Support on 10/16/2018 4:00:59 PM
Thank you for your feedback on PEX4M2E1. We apologize that is hasn't worked for you yet. Since NVMe drives are natively supported by Windows Server 2012, however, SBS 2011 may require a driver to be installed to enable support since it is based on Server 2008 R2 and lacks native support. Please remember that we have Technical Advisors available 24 hours a day, 5 days a week to provide support. You can reach one by going to www.startech.com/support. We'd be happy to help with any troubleshooting needed to get our products in working order.

By: Belala on 08/19/2018
I bought this adapter couple of months ago and my experience with this: easy to use in Windows 7 x64 with an 6 years old mainboard. Thanks to this I have a great performance SSD now in my system.
Comment Helpful? Yes - 4 No - 0 Report

By: Max Holmes on 08/17/2018
Even though this claims it has native os support it would not install my Windows 7 Ultimate x64 box. With no drivers listed on the website or a disc in the box it came in to try and install it manually this is a waste of my time and money. Normally Startech makes good products. if you're using Windows 7 best that you pass this one up.
Comment Helpful? Yes - 1 No - 11 Report

Nick, Customer Support on 8/20/2018 1:52:36 PM
Thank you for your feedback on our PEX4M2E1. This card does have native support in any operating system that supports M.2 NVMe drives. Windows 7 does not natively support this drive type and needs a patch from Microsoft in order to use M.2 NVMe drives. Please refer to our FAQ on this topic for more information: https://www.startech.com/faq/NVMe_drive_Windows_7_hotfix#PEX4M2E1 If you still have issues with this card please do not hesitate to contact us for support. One of our Technical Advisors would be happy to help! https://www.startech.com/support 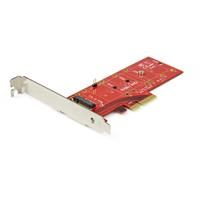 Email me the latest products, deals, contests and promotions. Sign up now!