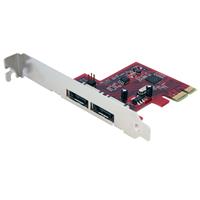 The controller card is backward compatible with SATA 2.0 devices, providing the versatility to use older storage, and features support for RAID 0 and 1 modes as well as port multiplier capability with command-based and FIS-based switching for connecting multiple external hard drives to a host PC through a single external SATA connection.

Connect your external SATA storage devices to your Laptop or desktop.

Connect your external SATA storage devices to your Laptop or desktop.

Does this device support SAS drives?

Although you can adapt a Serial Attached SCSI (SAS) drive to connect to a standard SATA controller card, the card must support SAS commands in order to communicate with SAS drives. SAS drives have a different command set that is not present on SATA controllers.

What is RAID and what are the different RAID modes?

Redundant Array of Independent Disks (RAID) is a virtual disk technology that combines multiple physical drives into one unit. RAID can create redundancy, improve performance, or do both.

RAID should not be considered a replacement for backing up your data. If critical data is going onto a RAID array, it should be backed up to another physical drive or logical set of drives.

The following are terms that are normally used in connection with RAID:

Refer to the following table for the list of RAID modes offered by some StarTech.com products: