Product Alert: The new StreamCatcher Pro software is now updated and fully compatible with Windows 10 and 11 (Windows 7 and up). Click here to download

Good recording - not so great software

By: macpoto1970 - 12/14/2017
The installation of this card was very easy. The drivers and software are downloaded from the Startech.com website. The small instruction booklet is good however the steps needed to complete are not exactly as shown. The card comes with multiple adapters for HDMI, Composite, Component etc. There are not many types that this card won't handle. The stream catcher software is no so great. There is very little instruction with the software so you really just have to click on things to figure it out. I have found that the software crashed if the computer goes to sleep for any reason. I started a recording from an old VCR and it worked great. Good quality recordings with little to no effort. I was having it save my files as MP4 and it did give you the option of saving to an alternate place then your main drive. None of the button in the software are labeled so you have to guess at what they do and how everything works, I would recommend running some tests before you start. Conclusions Pro - Lots of breakout cables and adapters for many connection types - Easy install - good quality recording Con - Mediocre software not very robust and little instruction I received this product in exchange for an unbiased review
| Helpful?
(5 Stars)

By: morty - 12/19/2017
I've always wanted to dab into streaming on twitch.tv and when I seriously started looking into it I realized most streamers use a second "streaming" PC with a capture card so they don't lose performance on their gaming rig. That's why I was happy to review this product. It was relatively easy to install and it just seemed to work with no headaches. Windows 10 recognized it right away and I didn't have to mess around with any drivers. My friends watching the stream said it looked really good quality. I received this product in exchange for an unbiased review.
| Helpful? 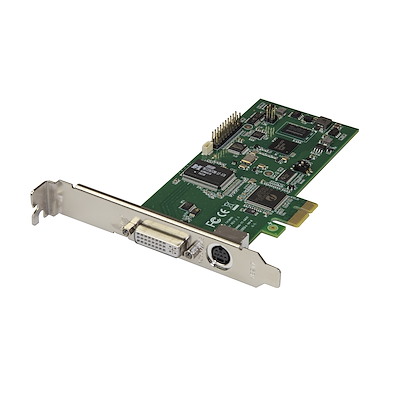