This high-definition capture device lets you record an HDMI or component video source, with audio, through a USB port on your computer.

With two standalone modes for recording or streaming, the capture device lets you record directly to an SD card for standalone capture, or use the built-in LAN port to stream video over the Internet.

This versatile capture device features an SD card slot, which lets you record video directly to a card without having to connect the capture device to your computer. It’s the perfect way to save time, while adding support for non-Windows® based platforms such as Mac computers or Android™ tablets. Software is also included enabling you to stream or record content with your Windows based computer.

For hassle-free video streaming, the capture box also has a built-in RJ45 network port that enables you to connect the capture device directly to your router or switch. With this standalone network connectivity you can instantly stream your video source over the Internet using streaming services such as Twitch®.

The device encodes in H.264, the most widely adopted video codec in the world, so you can rest assured that your video captures will be compatible with almost any device platform with no editing or converting required. H.264 is also widely supported by most software titles including Adobe® Premiere® and Windows Media® Encoder.

Plus, the included software lets you take screenshots, schedule recordings and instantly stream your video source over the Internet. The software is compatible with NTSC and PAL systems, which is perfect for professional video archiving applications where source media can change from project to project.

To maximize portability, the capture device is USB powered, so you don’t have to use an additional power adapter or find an available wall outlet.

The USB2HDCAPS is backed by a 2-year StarTech.com warranty and free lifetime technical support.

Connect USB 2.0 peripherals to your computer

When you troubleshoot issues with a video capture device, there are some quick tests that you can complete to rule out potential problems. You can test to make sure that the following components are working correctly and are not the source of the issue:

When you test the video cables and source with the video capture device, make sure that the following is true:

To check if the video capture device is detected in Windows®, complete the following:

When you test the video capture device on your computer, make sure that the driver and capture software is installed on your system for your adapter. Some cards may be able to support third party software, however, support is limited. For more information, visit https://www.startech.com/faq/video-capture-cards-third-party-software.

When should I upgrade my device's firmware?

You should not upgrade your device's firmware if you do not have any issues with the functionality of your device. The only time you should consider an upgrade is if you are experiencing a problem with the device, and you have confirmed that the firmware addresses this problem.  You can confirm this is the case by reviewing the documentation included with the firmware or by consulting with our Technical Support team. Incorrectly upgrading firmware can result in diminished performance so it is best to contact StarTech.com if you would like to perform this operation.

Can I capture the output of my USB2HDCAPS on multiple computers?

Multiple USB2HDCAPS can also exist on the network and can be selected in the ShareView Settings menu.

Note: While third-party software may work with the USB2HDCAPS, StarTech.com only supports the use of ShareView software for network streaming.

How do I use ShareView to stream to YouTube Live Events?

Note: There needs to be a "/" between the name and key.

What is a video capture card, and how can I tell if it will work in my setup?

Select a capture device that features the audio and video connections you want to use.  These can be identified on the product page, under the Technical Specifications tab.  Whenever possible, you should avoid using adapters or converters with video capture devices as they can cause issues or negatively impact the quality of the audio or video signals being captured.

When looking at a video capture device that requires software to use, it is important to consider the operating system you want to use it on.  You can find this on the product page under the Technical Specifications tab, which only lists supported operating systems.

Video capture device usually use drivers and software to record audio and video.  Both the drivers and the software can be found on the product page under the Support tab.  Different software will have different features so it’s a good idea to review the software to make sure it is a good fit for your intended usage.  You can do so by looking at the manual for the device, also located on the Support tab.  StarTech.com only supports the software included with the video capture device.

HDCP stands for High-Bandwidth Digital Content Protection.  This system protects high definition video from being intercepted, modified, or recorded between the source and the display.  All StarTech.com devices adhere to the HDCP standard, so they do not record HDCP-protected content.  HDCP content that is being blocked often appears as a blank screen or a screen with an HDCP error shown on it.

Certain video capture devices allow you to stream video feeds online with streaming platform such as YouTube.  For more information, review the product manual or watch our video on this subject.  You can find a link to the video in the description.  If at this point you have further questions about a Startech.com video capture device contact our technical support team for further assistance.

How can I tell if my video source will be compatible with this video capture card?

Although you may be able to plug in all of the connectors used for video standards associated with video capture cards/cables, you may still encounter issues that may prevent the video from being captured correctly.

Copyright protection cannot legally be bypassed, and StarTech.com does not offer any products that do so.

Examples of incompatible passive conversions include the following:

Note: S-video to composite can be passively converted. DVI-I/DVI-A and VGA can be used bidirectionally.

If your video source has the ability to change resolutions (for example, a computer), it may be possible to send an incompatible resolution. To verify that the correct resolution is being used, navigate to www.StarTech.com and click the Technical Specifications tab for your product. Make note of the Industry Standards and Maximum Resolution specifications.

In the operating system's display management, you can adjust your video source to match or go below the maximum resolution and if possible, the refresh rate of your capture card.

For a list of video capture cards that you can use to turn a video camcorder into a webcam, refer to the following FAQ: https://www.startech.com/faq/video-capture-cards-webcam-capable.

Are there any network requirements for the USB2HDCAPS?

In order for network streaming to work with ShareView, your network infrastructure must have a DHCP server included on the network. The DHCP server issues an IP address to the USB2HDCAPS and allows any computer on the same network running ShareView to discover the USB2HDCAPS.

When you use network streaming with the USB2HDCAPS, consider the following:

Can this video capture card record from more than one input at a time?

This video capture card cannot record from more than one input at the same time.

Note: Although the USB2HDCAPS can be connected to multiple computers on the same network, only one device can capture video at a time. 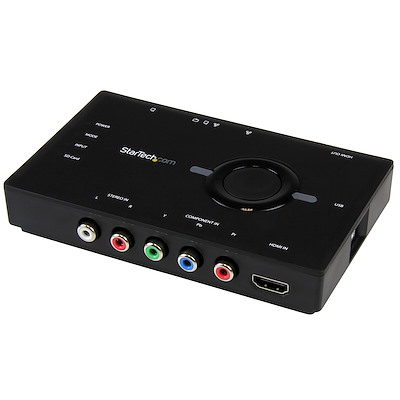