Product Alert: The new StreamCatcher Pro software is now updated and fully compatible with Windows 10 and 11 (Windows 7 and up). Click here to download

This DVI to USB-C™ video capture device works as an external USB capture card to record high-definition DVI video to your USB-C, USB-A or Thunderbolt 3 computer. With an aluminum enclosure, this device is built strong for fixed-location or on-the-go capture. It offers a separate 3.5 mm audio input for accompanying audio or voice-overs, and a DVI} pass-through port for connecting a monitor to review the video as it’s captured.

The included software makes USB-C DVI capture easy by turning your computer into a DVI recorder. Using a widely adopted codec, videos saved in StreamCatcher™ work with almost any video player and require no converting or editing.

With this DVI to USB video capture device, you can record meetings, presentations, conference calls and security footage, saving 1080p HD video at 60fps directly to your computer for easy editing and sharing.

With this DVI to USB 3.0 video capture device, you can record raw/lossless video using any third-party DirectShow™ compatible software, such as Open Broadcaster Software (OBS).

The USBC2DVCAPRO is backed by a 2-year StarTech.com warranty and free lifetime technical support.

No update for the app

By: Imels - 10/26/2020
I have this device, but cannot use it anymore after I updating my macbook to os catalina. Till now I don’t have any clue how to fix this issue.
| Helpful?
Stacey, Customer Support on 10/26/2020 2:48:59 PM
Thank you for your review. At present, the USBC2DVCAPRO supports up to MacOS 10.14. If you require a device for Catalina our UVCHDCAP supports MacOS 10.15. If you require additional assistance, please feel free to contact us. 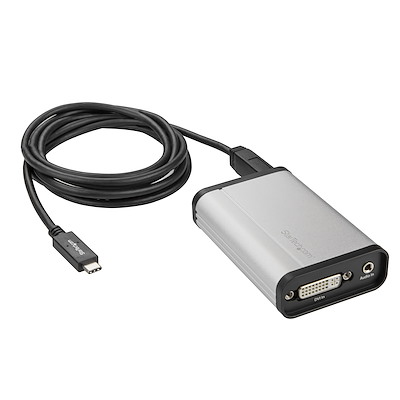