The hard drive enclosure features a trayless system that eliminates having to mount and fasten the hard drive into the enclosure or tray, for quick and easy installation or removal.

Using the SuperSpeed USB 3.0 interface, which is up to 10 times faster than the previous USB 2.0, makes backing up and transferring large files faster than ever, while still being usable on older USB 2.0 systems. With built-in RAID capabilities (0, 1, BIG, JBOD), the two drives can be combined for speed, redundancy, capacity, or even left as separate drives, based on situation needs.

Add one internal and one external SuperSpeed USB 3.0 to your PC

Add 2 USB 3.0 ports to a desktop computer through a PCI slot

Add 2 USB 3.0 ports to your desktop computer through a PCI Express expansion slot

Add 4 USB 3.0 ports to your desktop computer through a PCI Express expansion slot

When you troubleshoot issues with a hard drive enclosure, there are some quick tests that you can complete to rule out potential problems. You can test to make sure that the following components are working correctly and are not the source of the issue:

When you test the hard drive and hard drive enclosure, it is recommended that you do the following:

Note: Formatting a hard drive erases all of the data on it. Make sure that you back up all of your data before you reformat the hard drive.​

How do I set up or change the RAID mode for my hard drive enclosure?

Note: Any data currently on the drives will be lost during this process. You need to back up all of your data before you set a RAID mode.

To set up a RAID mode, complete the following:

How do I rebuild my RAID array?

In order to rebuild a RAID array, you need to replace a physical drive with an identical drive on the same RAID controller. Although standard RAID levels are generally agreed upon throughout the industry, the implementation varies between manufacturers. RAID arrays are typically not accessible when they are moved to another controller, and data may be unrecoverable if the drives are out of order or have been formatted or accessed by another RAID controller.

Note: If a drive or drives were damaged, it is possible that the RAID array may be permanently unrecoverable.

RAID should not be considered a replacement for backing up your data. If critical data is going onto a RAID array, you should back up the data on another physical drive or logical set of drives.

With the following RAID modes, recovery is possible using the same StarTech.com product. Refer to the following table for the appropriate method to use to recover your RAID array.

Will my hard drive work in this enclosure?

To determine if your hard drive will work in this enclosure, on the product page, click the Technical Specifications tab, and do the following:

What is RAID and what are the different RAID modes?

Redundant Array of Independent Disks (RAID) is a virtual disk technology that combines multiple physical drives into one unit. RAID can create redundancy, improve performance, or do both.

RAID should not be considered a replacement for backing up your data. If critical data is going onto a RAID array, it should be backed up to another physical drive or logical set of drives.

The following are terms that are normally used in connection with RAID:

Refer to the following table for the list of RAID modes offered by some StarTech.com products:

By: joe3 - 02/12/2014
Drive is ejected on MacPro sleep. Apple issue or hardware compatibility is unknown.
| Helpful?
Barry W., Technical Support on 27/02/2014 06:02:47
Thanks for taking the time to let us know this is happening. When Mac OS X sleeps, the drive will dismount from the system as the OS sleeps. When the OS comes out of sleep mode, the drive should remount before the system is ready to interact with. This enclosure, and others should act in this fashion on an Apple OS X version. We tried to reach you by email, but were unsuccessful. We would still like to assist you. Please contact us at 1-800-265-1844 or email us at [email protected]
By: JohnW - 02/22/2014
I have issues of the drive un-mounting with no warning or reason. Mac OS 10.6.8 Sometimes it stays mounted during sleep others not. Kinda flaky enclosure.
| Helpful?
(3 Stars)

By: JohnWar - 11/27/2019
No longer mounts, drives spin up fine normal beeps etc. No clicks. Set to raid 0 Very worried all data might be lost. Mac OSX
| Helpful?
Matt, Customer Support on 05/12/2019 10:49:13
It's important to us that our customers have a positive experience with our products and we're incredibly sorry for the issues you're seeing with our SAT3520U3R. This is not expected behavior and if you're seeing this on more than one computer it could indicate a degraded RAID or faulty enclosure. We've reached out directly at the email provided to help fix this for you but if you'd like to speak with us for live assistance, you can contact us at www.startech.com/support where our Technical Advisors are available 24 hours a day, 5 days a week to provide support. 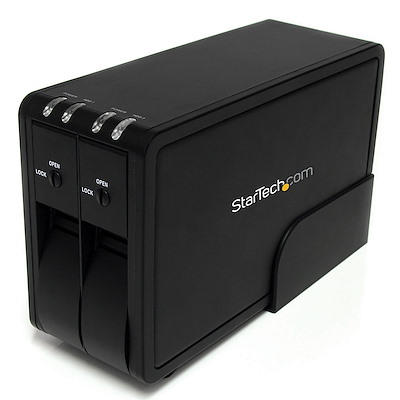